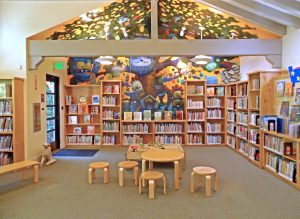 The Children's Library, the oldest free standing children's library in the country, was designed by noted local architects Birge and David Clark and built in the Spanish Colonial Revival style. The original building was built and furnished through a donation from Lucie Stern in honor of her daughter, Ruth.

Featuring a hand-molded Mission tile roof, a charming fireplace tiled with scenes from fairy tales, child-sized furnishings, and a brick-wall enclosed Secret Garden reminiscent of the one in Frances Burnett's story of the same name; the library has been a family destination for generations.

In December 2005, the first major renovation in 65 years began on this historic building and the doors re-opened on September 29, 2007. The updated Children's Library is not only charming and respectful of its heritage, but strives to be a vibrant learning and entertainment center for children.

Two new wings have been built that add nearly 2500 square feet for programming and collections. You will find delightful art work, fun furnishings, comfortable seating, up-to-date computer access, a state-of-the-art heating and cooling system, and an expanded collection of books and media. The new Tree Top Room, opening onto the renovated Secret Garden, is a welcoming space for children's programs or for sitting quietly reading by the fountain. 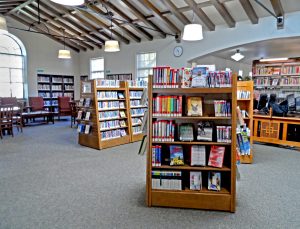 College Terrace Library was built in 1936 and is housed in a building of approximately 4,860 square feet. Designed by local architect, Charles K. Sumner, the building also houses a day care center operated by Palo Alto Community Child Care. In April 2008, the City Council approved reclassification of the building from a Category 4 to a Category 2 structure in the City's historical building inventory.

After a year long closure for upgrades and earthquake retrofitting, the College Terrace Library re-opened on Tuesday, November 9, 2010. 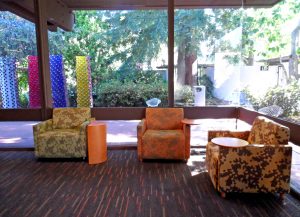 Downtown Library recently underwent an extensive renovation as the first phase of building projects approved through Measure N. Find out more about the Library Building Projects. 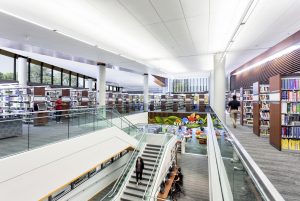 Mitchell Park Library was opened to the public in 1958. The library is approximately 41,000 square feet and is part of a new 56,000 square foot joint library & community center facility. Mitchell Park and Rinconada branches were the result of a bond issue of $700,000 approved in 1956.

In 1974-75, Federal Revenue Sharing funds were obtained to expand the facilities floor space by 70 percent to its current size. 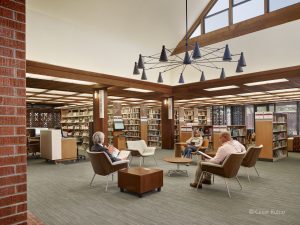 Rinconada Library was formerly called the Main Library. In 1956, a $700,000 bond issue was approved for the construction of two new library facilities, the Main Library, and the Mitchell Park Library. The Main Library, designed by Edward Durell Stone, designer of the United States Exhibit Hall at the Brussels World's Fair and the Stanford University Hospital, opened in 1958.

The original building was 26,313 square feet, including a 5,000 square foot basement. This library had the largest collection in the system, including the principal reference collection and the archives of the Palo Alto Historical Association.

It served primarily adults and teens and had a very small children’s collection. The original building had possessed 25,000 square feet of space.

The Main Library closed for major renovation on April 30, 2013. The upgrade was funded with proceeds of the $76 million bond measure (Measure N) passed by Palo Alto voters in November 2008. The improvements to Main, renamed Rinconada Library, include the addition of approximately 4,000 square feet to the current 26,300 square foot library. A new wing with restrooms and a 100-person community meeting room was added. Four small group study rooms were also added to the building. The interior of the existing library was reconfigured and totally upgraded with the addition of air conditioning. All the improvements were made with consideration for the historic nature of the existing building.

Get a Library Card