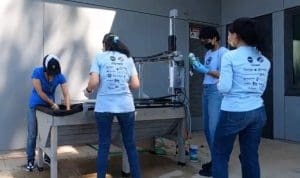 With the help from our AWESOME community, the library built an agricultural robot at Mitchell Park.

At the Palo Alto City Library, we take literacy as job one, and this includes digital literacy.

Our robotics program is arguably our most high-profile digital literacy endeavor. Many of you are already familiar with the Library's robots Dewey and Elsie. They are good at entertaining the little ones and teaching kids coding.

Dewey and Elsie won the 2020 Outstanding Achievement in Local Government Innovation award from the Alliance for Innovation as well as the 2019 Top Innovator’s Award from Urban Libraries Council. In addition, the California State Library based a CopyCat Grant on our Robo Dojo toolkit, allowing other libraries to easily implement our tried-and-tested program.

Building upon this success, we launched a new FarmBot robotics project called "Harvest at the Library" this year.

We are still tying up some loose ends, but ultimately the FarmBot will be able to sow seeds, water plants and get rid of weeds by itself.

Let's all welcome the newly-minted FarmBot to our robot family! 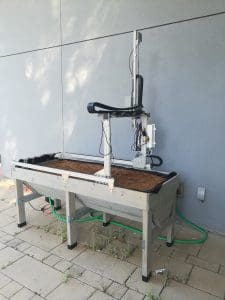 Unlike Dewey and Elsie, our FarmBot is the first robot that we built from scratch and a testament to our community's talent, creativity and spirit.

We enjoyed much support along the way. The Pacific Libraries Partnership agreed with our vision and sponsored the project with an innovation grant. In addition, many city departments supported us, including: The Mitchell Park Community Center which offered a home for the FarmBot; The Fire Department that conducted fire inspections; the IT department which installed a new network for the robot; and the Public Works Department which provided crucial electricity and water access.

Of course, the most challenging part was building the FarmBot.

That's where our superstar volunteers from the Space Cookies saved the day. Space Cookies FIRST Robotics Competition Team 1868 is a local girls robotics team, founded in 2006 as a partnership between NASA and the Girl Scouts.

The Space Cookies team brought their experience and  knowledge about robotics and engineering to the project. Without their generous help, the FarmBot project would not have gotten to where it is today. 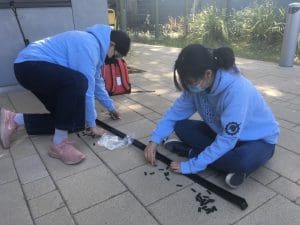 We made great progress with the project in the face of the pandemic. We had to adhere to strict social distancing and masking rules, allowing no more than four girls on site at a time. We even had to have separate sets of tools for each volunteer.

The complexity of the FarmBot was an additional challenge. A typical FarmBot kit contains a long list of items, including extrusions, wires, sensors, chips etc.

The girls were thrilled to work on the project, and they gained new knowledge from it, through much trial and error. Sometimes, we would hit a technical problem, requiring that we disassemble sections of the robot and redo the work. And there was no small amount of pain...literally. Some tasks really hurt their fingers, like repeatedly snapping off and on the tabs on the belts used to organize the wires and the water tube. 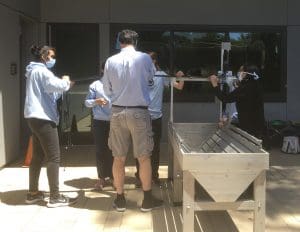 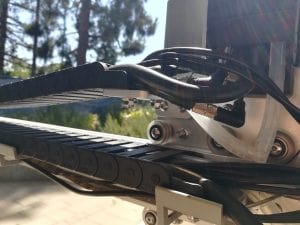 The other lessons were all about robotics design and engineering. The FarmBot assembling kit contains some nice engineering tricks which the girls learned and can now use in their future projects. For example, designing small indented notches in plates can make alignment easier during construction. Eccentric spacers can change the spacing slightly between the V-wheels and an extrusion. The V-wheels can then be adjusted to move at a desired state. 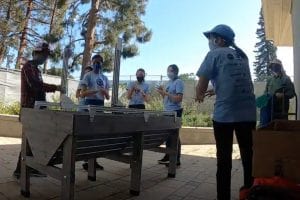 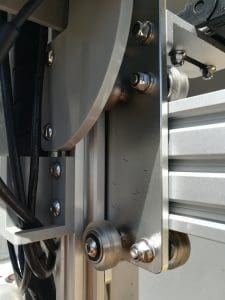 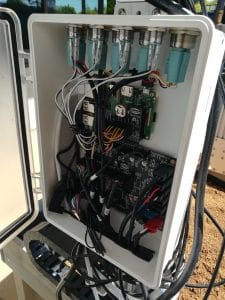 With the help from the community, we are now moving on to the next challenge of the project, which is to tune the software with the hardware. It can take rounds of troubleshooting before the FarmBot starts to function as expected (Fingers crossed!).

And sometimes, this means we have to go back and examine the hardware pieces more closely. So far, we have identified missing pieces in the original FarmBot kit and coordinated with the vendor on that. We also discovered and swapped out a deficient stepper motor. And we have fixed more hardware parts that got assembled incorrectly but are hard to identify without running software on the bot.

The work continues so stay tuned for updates!

We welcome your respectful and on-topic comments and questions in this limited public forum. To find out more, please see Appropriate Use When Posting Content. Community-contributed content represents the views of the user, not those of Palo Alto City Library