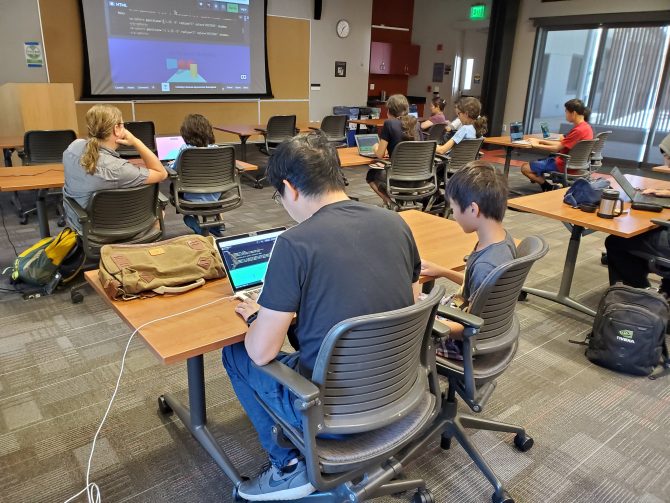 The eLibrary team at the Palo Alto City Library held a VR Hackfest on June 22nd, 2019 where participants created VR scenes and published them on the Distributed Web for the world to see.

The Library will showcase the VR scenes and the underlying technology in an exhibit, which seeks to engage the public in the issues and potential of two emerging technologies: virtual reality and the ‘distributed web.’ 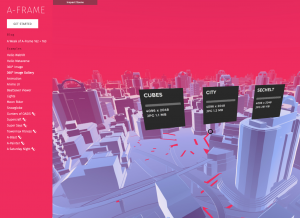 In the VR Hackfest, participants learned how to use A-Frame code to render 3D scenes that can be experienced through a web browser or VR headset.

A-Frame is a new framework that web publishers and 3D designers can use to design web sites, games and 3D art. A-Frame is an extension of HTML, the code used to build web pages. Anyone who is familiar with HTML will pick up A-Frame very quickly, but it is simple enough even for beginners. By just changing the values of a few parameters, novice coders can easily change the shape, size, color and location of primitive 3D objects, add 3D backgrounds and more.

The collection of 3D scenes created in the VR Hackfest was published to the Internet using the Inter-Planetary File System (IPFS), a distributed web technology developed in Palo Alto by Protocol Labs.

IPFS allows anyone to publish to the Internet without a server, through a peer-to-peer network that works seamlessly with the regular Internet.

IPFS can load content much faster, more securely and allows people to publish directly to the Internet without the need of 3rd parties, like Google or Facebook. But IPFS also poses new problems. Already IPFS has been used to overcome censorship efforts, but like any technology it has its downsides. Content on IPFS is essentially permanent, allowing free speech to flourish but it could also make hate speech impossible to control. 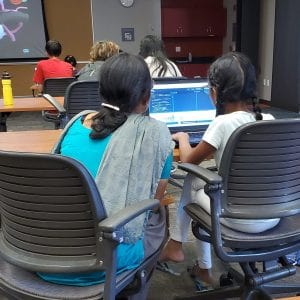 The VR Hackfest and Exhibit seek to introduce the public to these technologies and to challenge the community to consider the implications they have for information access, political speech, censorship, the arts and many other aspects of our online lives.

The 3D scenes created at the VR Hackfest will be available to anyone on the Internet starting June 27th.